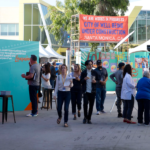 “Wellbeing Starts with We”

A California City Creates Community at its Inaugural Wellbeing Summit

The Summit was designed to engage a broad cross-section of stakeholders to both understand and implement the findings from Santa Monica’s Wellbeing Index – the first in the US, which was made possible by a $1 million grant from Bloomberg Philanthropies.

Julie Rusk, Santa Monica’s Chief Wellbeing Officer, summed up the day this way: “This is an opportunity for everyone to come together to connect, to learn from each other, and to share their best ideas for how we really become the sustainable city of wellbeing for all.”

I had the pleasure of attending Santa Monica’s summit as an invited presenter (representing the Wellbeing Economy Alliance – WEAll) and a participant. A month later, I find my-anthropologist-self reflecting: what lessons might be gleaned for those of us seeking to advance a Good Life for All? As a key event in the wellbeing movement landscape, what core message can Santa Monica’s Summit impart?

A flash of insight came in the form of a T-shirt – the ones silk-screened on demand at the Summit itself, with the slogan “Wellbeing starts with We.” Above all else, this event underscored the necessity of shifting wellbeing work from me to we, and it highlighted several characteristics vital to making a thriving community. Here are 6 of them, and just for fun, they all start with “C”:

6.     Commit to move forward together

For explanations and examples of how these community-making characteristics played out at Santa Monica’s inaugural Wellbeing Summit, read on. 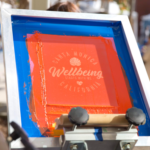 Santa Monica’s Summit builds on 4 years of work to measure residents’ wellbeing through the city’s Wellbeing Index. The index tracks indicators of progress in 6 areas: community, place and planet, learning, health, economic opportunity, and overall outlook, using data from resident surveys, social media, and various other sources available to the city. In short, this data is used to understand how residents are doing so that the city can invest in areas that will have the greatest impact. So first and foremost, the summit was a celebration of progress made to date.

The positive approach can be surprisingly controversial. An older Caucasian gentleman who came to protest at the entrance held a cardboard sign hand printed in red marker that read, “Wellbeing? What about Being Real?” A valid question, to be sure. His opinion (shared by others) was that the city should focus on “real” problems like homelessness and crime.

City Manager Rick Cole offered this response in his post-Summit reflection: “Pursuing a positive approach to our problems is not a naïve denial of them. All the challenging issues of our time were addressed on Saturday – but in a spirit of “what can we do to make things better?” 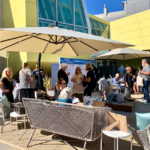 One of the main goals of the Wellbeing Summit was clearly to bring the community together in a fun and festive atmosphere. From the up-beat kick-off by the Santa Monica Youth Orchestra’s Mariachi Band to the closing circle dance with Bhutanese dancers, summit goers were treated to countless opportunities to interact in the California sunshine.

We lingered over creative stations like the “What’s Wellbeing” wall, where participants could write in their ideas for heath or economic opportunity; the “Family Photo” studio, where passers-by posed with strangers for family-style portraits (and became acquainted in the process); and the Santa Monica Tourism board’s “Staycation” location, where kids played ball on Astroturf and adults lounged in pastel Adirondack chairs and dug their toes in sandboxes.

Perhaps it’s a “California thing” but we also chatted with each other as we waited in line. There were lines to sample free food from local vendors – like acai bowls, jackfruit sliders, street corn, and aguas frescas – and a significant wait to get a silk-screened T-shirt printed to order. In fact, my favorite memory from the day was dancing to Prince in the T-shirt line with an elderly African American woman I had just met. With the right conditions, that intercultural and intergenerational connection we try so hard to fabricate just happens naturally.

The summit planners indeed succeeded in this goal: early event surveying showed that 40 percent of participants met 5 or more people for the first time. As for the value, the head of Familias Latinas Unidas! (purveyor of aguas frescas) summed it up best as he twirled a volunteer during clean up: “It’s about ‘to connect’ because once we connect, we get along better.” 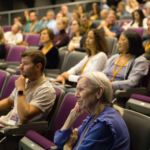 Running concurrently with the outdoor festival were dozens of panel discussions and workshops that aimed to build participants’ understanding of the factors that affect wellbeing for people and the planet. The variety of session topics meant that was something for everyone – for different learning styles, knowledge about wellbeing, and interests.

The first panel of the day laid it out in a somewhat wonky but still accessible way: “Wellbeing: What it Is, What it Isn’t & Why it Matters,” with Anita Chandra (RAND), Carol Graham (Brookings Institution), and Neal Halfon (UCLA Center for Healthier Children, Families & Communities).

But there were also sessions that engaged local activists, like “Building Resilience in Communities of Color: Lessons from Virginia Avenue Park’s Parent Groups,” led by Santa Monica resident Irma Carranza, and an edgy workshop titled, “Creative Resistance through Printmaking,” in which participants learned about the role printmaking has had in California supporting movements such as the United Farm Workers while creating their own custom-stenciled posters.

The quality of these diverse sessions raised the wellbeing quotient of the summit beyond positive emotion and social interaction to incorporate learning, one of the dimensions of Santa Monica’s Wellbeing Index itself. As one Santa Monica resident remarked, the Summit was a “great way for the community to come out and … learn about things that we don’t normally learn about in our own insular world.” 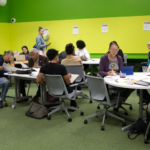 Rather than simply imparting knowledge, many sessions at the Summit aimed to inspire more collaborative, solution-oriented learning. In the “Mobility Matters” workshop, participants considered how reimagining the way we use our streets can impact wellbeing, looked at models from Los Angeles County, and worked elbow-to-elbow to design kid-friendly streets for their own neighborhoods. And in “Wellbeing Imaginarium,” summit-goers participated in an interactive visioning experience to create their own city of wellbeing.

At the summit, the City of Santa Monica also demonstrated its tangible support for resident-led co-created solutions in the form of Wellbeing Microgrants, a new approach to empower residents to make positive change. Each year, the city plans to distribute several grants up to $500 for small-scale, local actions to improve community wellbeing, with annual themes varying according to the Wellbeing Index findings.

To see the microgrant program in action, Summit-goers could visit a booth in the outdoor marketplace to meet past grant recipients, see displays of their work, talk to them about their experience, and even buy goods produced with the grant, like traditional Oaxacan shawls. Also on hand were applications for the next grant cycle and city staff to help explain the process.

Residents also had an opportunity to start co-creating their own projects at a design charrette I led. A design charrette is a fast-moving, interactive, creative process in which participants write quick ideas on Post It Notes (in this case representing improvements they’d like to see in their communities within the framework of the six dimensions of wellbeing), organize those ideas into categories, and then form small groups to discuss and decide. Besides a better understanding of wellbeing and knowledge/skills for project design, at least a few participants left with plans shaping up to apply for a microgrant together. 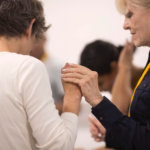 Perhaps the most vital characteristic for a thriving community is care for others. Santa Monica Mayor Gleam Davis made this assertion quite clearly in her blog post reflecting on the Summit:

Finally, we will know that we are a sustainable city of wellbeing when, in considering local policies, we stop asking what’s in it for me and start asking what’s in it for everyone.  This community spirit needs to permeate all our decisions, even those that involve asphalt and lane markers. Only when people in the community feel responsible for the wellbeing of others in the community—people they know and people they don’t know, can we truly reach our goal of being a sustainable city of wellbeing.

Unfortunately, care for others doesn’t always come naturally. Sometimes we just see the problems in our community rather than the people who are struggling. “Homelessness” is one such issue in Santa Monica (as well as my own coastal town to the south), in which discourse is typically framed in terms of public detriments such as visual blight and crime, not human suffering. The Summit’s solution? An interactive station with virtual reality headsets that allowed users to literally walk in another person’s shoes in a journey from homeless to housed. The station underscored the reality that it’s much easier to care for others when we can imagine their experiences as our own. Leave it to “Silicon Beach” to use technological innovation to do just that. 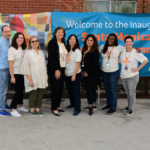 Overall, Santa Monica’s Summit represents the government’s commitment to placing the people and the planet at the forefront of their decision-making. City Mayor Gleam Davis sees this as her charge: “One of the sacred duties of all governments – federal, state, regional, and local – is to improve the wellbeing of their constituents.”

Anuj Gupta, Santa Monica’s Deputy City Manager explains, “We in the city government, we’re not really succeeding at our jobs unless our people are thriving and that’s really what this [summit] is all about: making sure our community is healthy, connected, engaged.”

At the same time, the Summit made it clear that wellbeing is a collective endeavor. In the final session of the day, a community conversation on “What’s Next for Wellbeing” with Mayor Gleam Davis and City Manager Rick Cole, the mayor shared this sentiment:

We truly are a Sustainable City of Wellbeing, but this is not something that the city government can bestow on you or can do alone. If we are truly going to live up to that title, then each and every one of us needs to invest in this community. I know we heard today that there are things we need to work on. But let’s do the hard and satisfying work of working on them together….

This is only the beginning. A summit seems to me like it’s more of a closing. It is not. We’ve just started to climb. So let us continue together so we can all learn, so that we can all … act upon doing better for everyone.

For me, Councilmember Jara is speaking not only to residents in Santa Monica, but to all of us engaged in the global wellbeing movement.

To get a better feel for Santa Monica’s inaugural Wellbeing Summit, watch this recap and hear the individuals quoted above speak in their own voice:

The post Wellbeing starts with “we” – guest blog on building a wellbeing economy in Santa Monica by Juliana Essen appeared first on Wellbeing Economy Alliance.