The OECD as the clinic to get our economies off growth? – blog by Katherine Trebeck 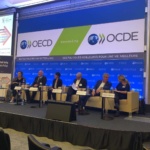 The OECD has convening power. It has influencing power. And it has the power of its policy advice. It can prescribe changes that are listened to the same way a patient listens to their doctors advice.

So when the OECD’s regular gatherings on measuring wellbeing and shaping policy show signs of moving away from the cosy ‘GDP and beyond’ mantra and the non-system-challenging focus on treatment, then it is worth taking notice.

There’s a new regime in town.

In Paris over one hundred people spent two days hearing from the governments leading the effort to embed a focus on wellbeing into policy agenda. By the end, people were joking that the audience must have ‘framework fatigue’.

Diverse governments, from the UAE to Iceland, from Scotland to Jersey, from France to New Zealand, from Finland to Paraguay set out their efforts to shape policy-making – and, crucially – budgeting, in accordance with promotion and enabling of wellbeing. Discussion was about taking this seriously, changing planning and spending accordingly: the OECD Secretary-General told the audience that: “if it ain’t in the budget, it ain’t really a priority”.

Tensions between different conceptions of wellbeing were, thank goodness, not swept under the carpet as they often are in such discussions. People recognised that a focus on multidimensional wellbeing and the drivers of wellbeing was not the same as rallying around a single number measuring subjective self-reported wellbeing.

But what is done with any measure matters: Professor Jeff Sachs warned that looking at narrow measures means narrow perspective: “the stock market rising”, he said “but US life expectancy is falling, [the US has a] suicide and opioid epidemic – our country is in crisis, but we don’t know it’s a crisis because we don’t look at the right data; this question is not even asked”.

Speaking of drugs, Sachs (channelling WEAll Ambassador Robert Costanza) likened the prevailing money and growth focus to an addiction: “making money is addictive and we have an addiction”. This was reinforced by Martine Durand, OECD Chief Statistician and Director of the Statistics and Data Directorate who said “GDP was never meant to measure wellbeing; it’s been abused and now we’re addicted to it – need to go to a clinic to stop this addiction”. Fortunately, the doctors on duty are willing to look the patient in the eye and tell them some hard truths.

One of these is grappling with the need for both of the ‘two S.C.s’ as I described them. This first is a focus survival and coping – treating people whose wellbeing is low. This is, of course a humane response. It is also not enough in the face of an inhumane economy that is the root cause of so much anxiety and stress, to both people and to planet.

Hence the need for the second ‘S.C.’: system change that asks why people’s wellbeing is low and what changes in the economic set up need to be undertaken in response? Gabriela Ramos, OECD Chief of Staff challenged delegates to think beyond celebration of amelioration: “Even the existence of social safety nets tells us people are falling and we need to catch them. But how do we keep them from falling?”

In terms of system change, there was also a frank discussion about the relevance of a growth orientated agenda in the richest countries. Of course ecological economists and others have been questioning this for years, but to have senior members of the policy making establishment state that growth doesn’t matter for quality of life in GDP-rich countries (asserting it is “irrelevant for rich country’s wellbeing”) and to even question why the OECD would maintain a programme under the heading of ‘Inclusive Growth’ seemed to be a new high point for the post-growth conversation.

Finally, an impatience with the disconnect between what the wellbeing community has been measuring and saying for years and slow progress in shifting the economic agenda was apparent. Angel Gurría, OECD Secretary-General, opened the conference by saying the world is “well past the point when a lack of data is an excuse – [now the] need is to rationalise and choose and targets which are the relevant indicators”.

If these two days were a heartening stock-take on the state of the debate on wellbeing measures and policy agendas, their timing was just as useful: Finland is currently President of the EU and has made the ‘economy of wellbeing’ it’s flagship agenda. At times, the Finnish contribution seemed a little out of place, better suited to a gathering 5 years ago in that it emphasised the business case for wellbeing and asserting that if governments boost wellbeing that will boost growth. Fortunately, if the rest of the OECD conference was anything to go by, the thinking has moved on and the question is now “what can growth do for wellbeing?”. Not the other way around.

The post The OECD as the clinic to get our economies off growth? – blog by Katherine Trebeck appeared first on Wellbeing Economy Alliance.